I've been asked a fair bit recently about which paints I used on the King Tigers and Sturmtigers that I finished last week, so I thought I'd put it all down in writing for everyone. 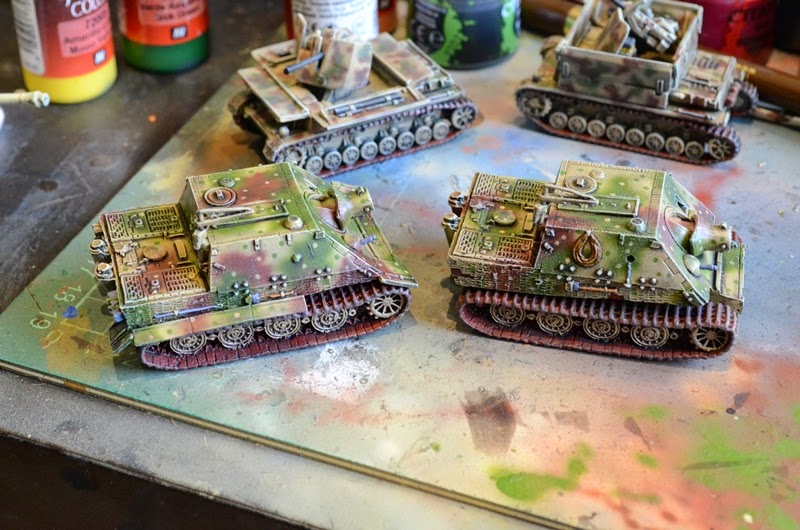 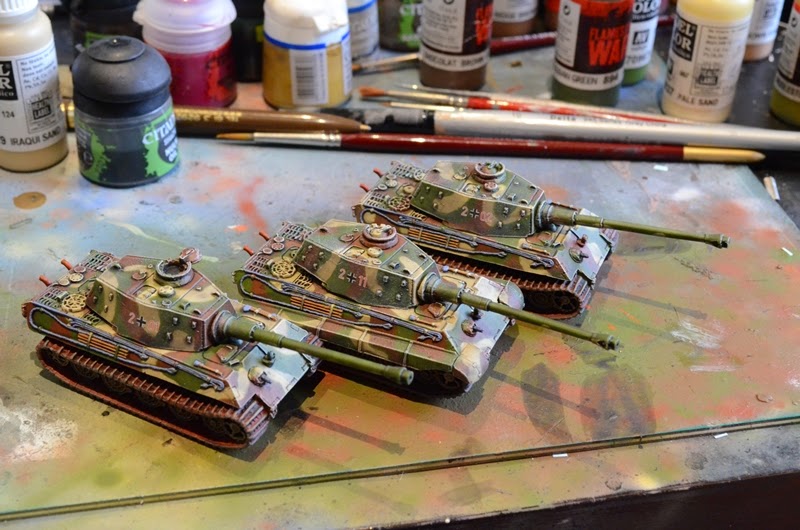 Well, unfortunately it's as not as easy as just listing one paint for each colour, as I've recently taken to mixing paints to achieve the desired colours I want, and that's exactly what I've done with both the King Tigers and Sturmtigers.

As a reference, the Mobelwagons in the top photo behind the Sturmtigers were painted with non-mixed paints, these being Iraqi Sand, Reflective Green, and Chocolate Brown. You can see the difference in vibrancy, especially in the Dunkelgelb, between the mixed and non-mixed paints. There's no right or wrong when choosing paints, just personal preference.

Now I don't have a precise mix ratio as I like to add paint until I'm happy with the colour, but as a rough guide it would be approximately 50/30/20. I add the Moon Yellow to brighten up the mix a bit, so that the Dunkelgelb doesn't look to drab and dreary.

If I want the Dunkelgelb to not appear so stark, I'll substitute Middlestone (VMC 70.882) instead of the Brown Sand, as I did with the PzIV's below. 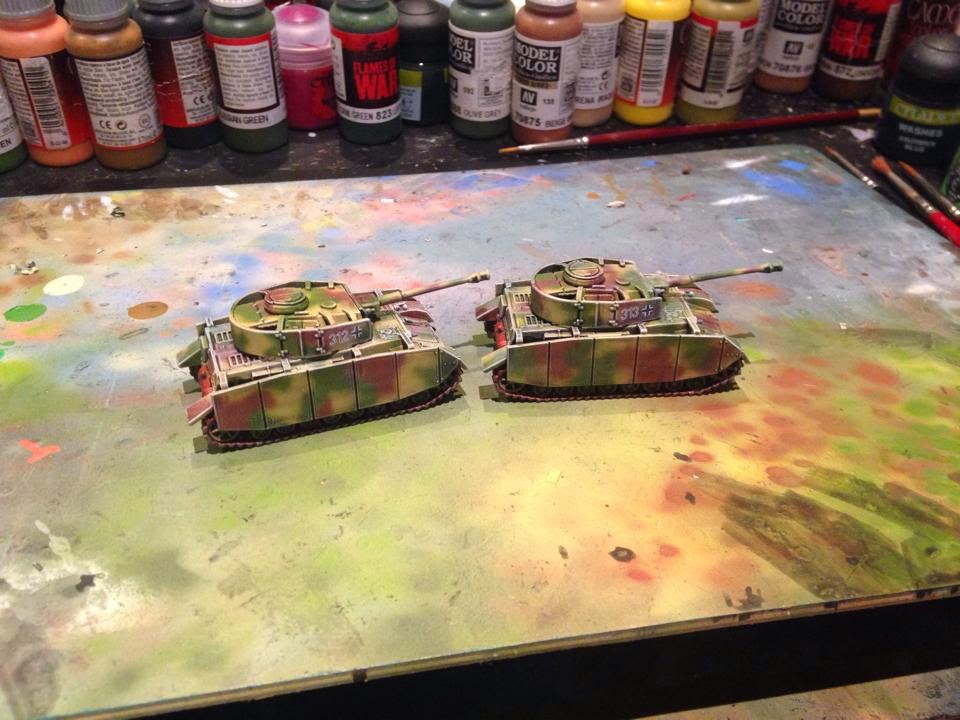 Once again there's no precise ration, but it's approximately 70/30. I like the tint of the Olive Green, but it's far too light to be used by itself, so the Russian Green is added to darken it up a bit. Any darker green can be used for this I guess, I tried Russian Green first and liked the result.

As before, the approximate ratio is 50/30/20. The Red Leather and Cavalry Brown make a decent red-brown mix, but is a bit too light for my liking, hence the addition of the Scarlett Red. It darkens the mix but still keeps the mix between red and brown to a nice ratio.

A few more tips and tricks that I use...

A- I airbrush all these paints. You can brush them on, and many painters get great results doing so, but for me I prefer the speed and ease of the airbrush.

B- I wash each tank after airbrushing, usually with Nuln Oil Shade from Citadel (Games Workshop). I don't thin it down, but I carefully observe each tank and use a brush to remove any excess wash, watching to make sure it doesn't pool anywhere it shouldn't.

C- I then drybrush each tank using Pale Sand (VMC 70.837). I use a medium sized broad headed brush and go fairly lightly over the tank. As well as picking out the edges the drybrush will dampen the Olivgrün and Rotbraun slightly, tying the different paints together.

D- Decals! I run a slight drybrush over the finished decals also so that they wont appear so shiny. This can be with the Pale Sand or any other Dunkelgelb type colour.

Well I hope this little guide is of some help to you guys out there. If you have questions don't hesitate to ask! :)